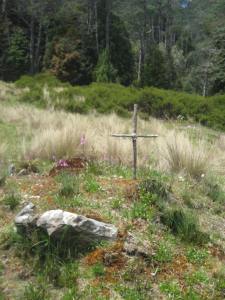 Tentatively entitled ‘On Demon’s Shores’, my first view of the story was a woman, crying over a grave very similar to this. She’d been a convict, but had served her seven year sentence and was married and living out in the bush, away from the prying eyes of the government.

My husband and I had been bushwalking and were on our way out when we passed this, still with a good couple of hours walk ahead of us. To this day I don’t know if it is actually a grave, or simply a memorial, nor whether it’s for human or animal, but as we walked out of the bush that day more and more of a story came to me:

The woman was Scottish. She’d learnt folk magic from her grandmother, and had worked with the fairies of her home to cast her magic. But she could not communicate with the spirits in her new home, halfway across the world in the penal colony of Van Diemen’s Land.

What to do? The solution came easily. My Scottish character had to learn the ways of this land, and what better way to do it than to learn from an Aboriginal woman – what food to eat, where to find water, how to find/build shelter. Once she was attuned to living off this land, then she might better be able to connect with the spirits. Perhaps then she could work her magic again.

In the three years since then, ‘On Demon’s Shores’ has evolved and grown, and I’ve been busy researching and writing and reading and rewriting, pouring over old newspapers and rewriting some more.  I have learnt so much about the history of my home state, and most particularly the Indigenous inhabitants.

I would like to acknowledge the traditional custodians of the land on which I live and write, the Pallittorre people.  I would like to show my respects to the elders past and present.

Sadly, to the best of my knowledge, there are no descendants of the Pallittorre people alive today, and therefore no present elders (Perhaps someone can correct me on that?). The Tasmanian Aborigines were almost completely wiped out in less than 30 years of settlement, between 1803 to 1830. My heart breaks at the terrible crimes that were committed against the Aboriginal people, and all the knowledge that has been lost, all that we could have learnt from those who’d lived this land for generations before we ever set foot on it.