I wanted to show you my favouritist place in the whole world! (yes, I know favouritist isn’t a word lol – but it needed to be emphasised here) 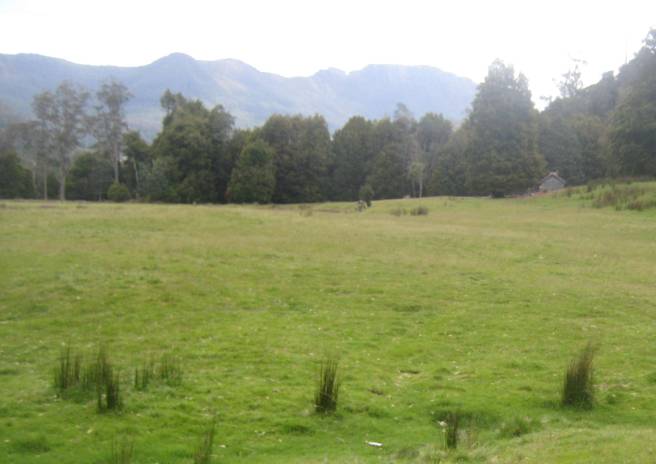 This is The Paddocks (not quite it’s real name, but we can’t have everyone flooding the place!). I’ve been here about half a dozen times since my first visit almost 15 years ago. It’s a 5 hour walk – at a steady pace, although on saying that we did stop to admire the views a lot! I haven’t been here since before my son was born – I haven’t been on a bushwalk anywhere since before my son was born, at least 7 years ago!

The Paddocks is an absolutely glorious spot to go Bush Walking here in Tassie. It is the location in my story Sanctuary, as best I could describe it at the time. Description however, is not my strong point, so while I was there I set about practising that skill, taking particular notice of all the sights and sounds and smells. This is what I came up with…

Footfalls on the trail are muffled by the layer of leaf litter, broken occasionally by the crunch of twigs and and silenced by the soft spongy moss. Out in the open, crossing the paddocks – with their damnable button grass – is harder. The button grass grows in high clumps, close together, creating deep narrow ravines. The choices are to using the grass itself as stepping stones… sort of… or try and walk between the grasses, though when the base of the clump is halfway up to your knee this can be tricky (and what about snakes!!). Thankfully most of the paddocks have walking tracks where the button grass has been thinned out – but we did head ‘cross country’ a couple of times as we explored the area.

The scent changes; on the first day the sun shone brightly, warming the air and releasing the sweet scent of rotting leaves and hot moss, and surprising me with a fragrance that smelt distinctly of chai tea, even though none of the spices used in the drink grow here.  On our way out the temperature had dropped. We had enjoyed a thunderstorm on our first night, listening to the sporadic rain on the tent, as the flashes of lightning lit up inside and the thunder rumbled almost instantly overhead. Rumbled is not strong enough actually. For a moment, at least, the storm was directly over head – and the thunder thundered! It didn’t roar, or roll, and rumble seems a far more gentle word for what we experienced. It boomed, cracked through the sky.

But I’ve digressed a little. Because of the thunderstorm, it was cooler on our way out. The air was cold, fresh, crisp. The myriad of scents obvious the previous day were muted now, barely there.

The scenery was as breathtaking as always. Everywhere is green – all different shades. And varying shades of grey and brown as well, from the tall trees with their moss covered bark to the wet rotting stumps. But now and again there is a surprise of colour. Fungi mostly, brightening the bark. The odd flower – tiny purple and white ones, some with yellow stamens. And out in the open there is the brilliant blue sky and the distant mottled green mountains.

And on our way out we took a fork in the path – one neither of us remembered being there, from our separate trips – and discovered the most amazing waterfall – so tall, absolutely stunning.

And now I’ve said my piece – I’ll show you a few snippets: 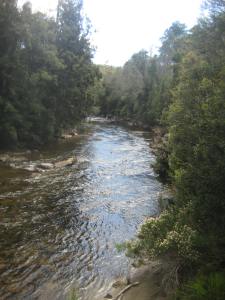 During our walk inspiration struck, a couple of times, and I managed to jot down a few ideas, including one for a historical novel, based in Tasmania during convict times, and including a bit of fantasy and magic too.

But that is not my most exciting news from my weekend – my most exciting news is that my gorgeous man (who suggested the bush walk in the first place) proposed to me on the banks of the river, as we paddled our sore and swollen feet in the icy water. OMG! It was the last thing I expected at that moment. A wonderful surprise! 😀

6 thoughts on “A Perfect Place for Surprises”