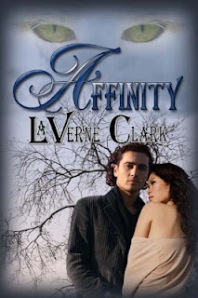 Some of you may remember me posting an invite to the Online Release Party of the above book – Affinity by LaVerne Clark.

Here is my (very belated) review!

Affinity is a paranormal romance and I love that extra element to the story. It tells the story of Jenna, a woman of Japanese descent who has the ability to call creatures and take on their attributes at will. Her talent is hereditary, passed down through her father’s line.

As an adult Jenna has managed to hide the truth about herself, but when she uses her abilities to rescue a young boy she finds herself getting more attention than she hoped for from sexy policeman Nick. Nick is troubled by his work as a cop. When he meets Jenna he knows she is hiding something, and follows his instinct to find out what it is. Their relationship quickly blooms, but as Jenna’s ability suddenly evolves to include humans as well, Nick is scared off.

When Jenna’s heroic rescue is reported in all parts of the globe, a man with ulterior motives seeks to obtain control over Jenna and her abilities. When other attempts fail, he kidnaps Nick forcing Jenna to give herself up in order to save the man she loves.

This ebook is published by The Wild Rose Press, if you’d like to read Affinity go to the website and purchase a copy for yourself. And while you’re there – you can pick up LaVerne’s first ebook – ‘Guardian of the Jewel’. http://www.thewildrosepress.com/index.php?main_page=index&manufacturers_id=841&zenid=a675f0743df82dabd40bb26bf09e201b