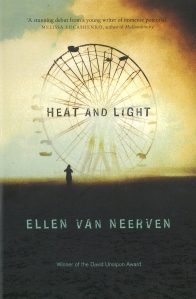 I got to hear Ellen van Neerven speak about her book, as well as many other issues faced by Indigenous people today, at the Tamar Valley Writers Festival just a few weeks ago.

Though Ellen’s book, ‘Heat and Light’, is presented as a collection of short stories, she said many people see it as a novel. It’s comprised of three sections – the first two are longer stories following the same story – though the first section it is told by many different characters, while the second follows one character in particular – followed by a collection of shorter tales in the third section of the book.

While I enjoyed all of the stories (though I did get a little frustrated at an unfinished storyline in the last part of the book), it was the second part,  ‘Water’ that really struck a chord with me. Set sometime in the future, this story tells of Kaden, a young Aboriginal woman  who has been employed to liase with the ‘Sandplants’ or ‘Plantpeople’, a recently discovered species of plant that has many human characteristics, including human-like faces, and the ability to unroot themselves from the soil and walk around. Kaden’s job is to convince these plantpeople to give up the islands that are their homes, so that the land can be remade into a new home for Aboriginal people whose land was taken from them. Seen as plants, and therefore not human, the company that employs Kaden, along with many others, do not see the problem in removing these beings from their home.

But as Kaden gets to know the plantpeople in general, and one in particular, she sees that they are more than just plants, and ends up in a relationship with one.

At the festival, Ellen had a bit to say about this story. Many say it is fantasy, speculative, a myth. ‘Speculative’ is a word Eleen was happy with, for the story speculates a possible future, but as she points out, ‘myth’ is a convenient word when discussing Aboriginal stories. It is a word that suggests old, ancient stories. But the stories of the Aboriginal people are held in the land, they’re still there, they’ve always been there. And (I’m aware I’m generalising here, I hope I can be forgiven) the spirits of these stories are as real to the Aboriginal people who hold those stories as they’ve ever been.

I really cannot recommend this book enough, and I desperately hope Ellen is writing more along the lines of her ‘Water’ story. I’ll certainly be keeping my eye out for more of her work.