Last week was the first week in a very long time I did not have a post scheduled and ready to go on Sunday morning. When I’m really organised, I write several posts at once, and schedule them for the coming weeks. When I’m not so organised – as has been the case over the last couple of weeks – I write them Thursday night.

That was my plan for last week, too. Unfortunately other things got in the way. Thursday morning we woke up with no power. This lasted all day, until around 3 we got a courtesy call from Tas Networks letting us know the power wouldn’t be on that night – they were letting us know so we could find somewhere else to stay if need be. (Which, I must say, is absolutely brilliant service). Thankfully having no power is not really a problem for us – we have a combustion stove – which means hot water as well as cooking and heating, and in our spare time we make and sell beeswax candles, so there was no shortage of lighting either. I was concerned about the chest freezer, but it seems to have been full enough to have survived (I didn’t open it at all while the power was out.)

The ice-cream didn’t make it. That was in the fridge-freezer, and by Friday afternoon had turned into thick shake. Concerned with unnecessary waste (it was almost a full tub) the kids kindly offered to finish it off with the help of some friends who dropped in.

The power was back on late Friday night, and Saturday morning gave me just enough time to do the three loads of washing that had somehow accrued over the two days, and make myself a cuppa at lunch time, before going out again for the rest of the day, coming back on around 6:30. I was feeling very unmotivated, and decided I could whip up a quick blog post Sunday morning, but waking up Sunday morning the power was off, again!

It was probably a good thing, really. Saturday and Sunday were sunny and warm, and I got several hours of weeding done in the garden, helped by my two year old who spent a good deal of time replanting the weeds I’d just pulled, and insisting I examine the worms we found as we turned over the soil… and then there was splashing in the stream that forms whenever we have a lot of rain… 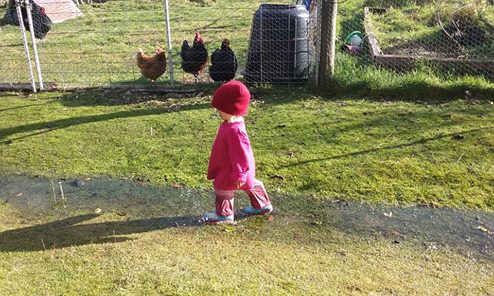 And I had intended to post this during the week, but it’s been one of those weeks, and I still don’t have a new blog post for Sunday (despite having two half-written book reviews, and three-quarters of a post about my nomination for the Leibster Award – thank you Alisdair Daws – 🙂 I’m getting to it!), so this is my blog post for Sunday! Happy Sunday!! 🙂 Hope everyone has a relaxing day! 😀

One thought on “Better Late than Never…”