I’ve done something to my arm. My left arm, thank goodness, not my right (I’m right-handed). Pinched a nerve is my guess – all I know is it aches almost constantly (the only time it doesn’t is when the rest of my body is in an incredibly awkward position!) and if I move it in a way it doesn’t like, I end up with a sharp shooting paint. It means I cannot touch type, though the first day of my affliction I pretended I could and carried on anyway.

Have you tried typing with only one hand? I am used to being able to type 2500 words in half an hour, should the story take me, so to be struggling with one painfully typed word after another is quite frustrating (surprisingly, my right hand does know where the letters are on the left side of the keyboard, but with only 5 fingers to type instead of 10, progress is slow). Luckily though, I have not been writing (though I should be, I signed up for Camp Nano again!!) , instead I have been editing last years Camp Nano: Red Sky.

It’s been interesting, delving back into my story, finding weaknesses and strengthening them , moving lines, paragraphs, phrases and scenes, deleting things, adding things. I’ve felt like a real editor probably for the first time ever. But I have three pages to go, which need to be basically completely re-written, and I can’t type.

So… after my first day of pretending that I could still type, the second day (yesterday) I gave up and spent the day reading. 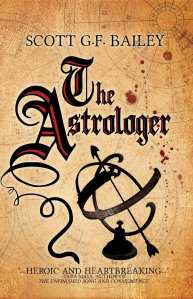 The Astrologer by Scott GF Bailey, is a recent publication from Rhemelda Press. I had the opportunity to receive a free copy for  review, and was instantly intrigued by the storyline – set in Denmark in 1601, The Astrologer tells the story of Soren Andersmann, Astrologer to King Christian of Denmark.

“If a man seeks the truth, he must be prepared to discover that the cosmos is both beauty and ugliness, birth and corruption.”

I loved this quote, to me it captures the essence of Soren’s struggle. Living in an age where Kings were enthroned by God and the sun revolved around the earth, Soren studies the stars and sees a different truth. After his mentor and idol is murdered by the king, Soren takes on the task of revenging his masters death by killing the king.

Throughout the tale, Soren discovers truths that alter his perceptions of his past, and sheds new light on the roles of those populating it.

It is a great story, but I had a little trouble getting into it to start with. I’m not sure if it was the language, which is very much appropriate for the time (although quite readable too!) or if there was something else, though one scene stands out in my mind where the Prince of Denmark – also named Christian – is speaking with Soren about the latter’s book. The conversation is not to the Prince’s liking, and he asks to change the subject, yet his very next words continue the topic. shortly thereafter he asks to drop the subject again, and the carries on the conversation. The happens 3-4 times in the one conversation and I found it quite off putting – I was not sure if this was deliberate – to show up an aspect of the prince’s character- or just bad writing.

Soon however, the story had me hooked. The author provided vivid descriptions of people and places that allowed me to disappear into the story, and the story line kept me reading till the end. A great story on the beginning of the age of reason, and it’s clash with the older beliefs of church and God.

And there was something else I liked about this story – two of the characters share a name – the King and the Prince are both called Christian. This is generally a no-no on the ‘rules of writing’, yet here there is no confusion at any point as to which character is being referred to.

Highly recommend this novel to all who enjoy historical fiction. It is well worth the read.